This is a device used to draw the gas from cylinder at required pressure and control the flow of gases at a constant rate to the torch or blowpipe. For different types of gas, we use different regulators. In oxy-acetylene welding plant we use oxygen and acetylene regulator. There are two types of regulator.

Single Stage Regulator. This regulator is designed to regulate the pressure in one stage only. Initially, the desired working pressure is set, but as the work proceeds and gas is consumed, pressure drops. This cause a change in the amount of gas delivered and requires constant adjustment to obtain the correct flame. The adjustments are necessary more frequently as the cylinder becomes empty. 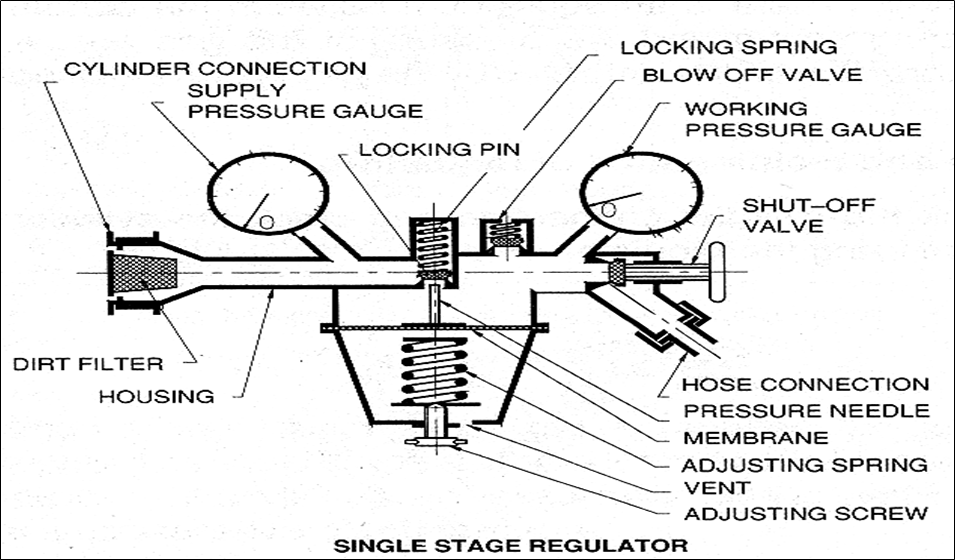 Double Stage Regulator. In this type, the reduction of pressure is made in two steps. The advantage of this arrangement is that any variation of the first stage pressure is taken care of by the second stage pressure. For heavy duty cutting or welding, it is preferable to have this type of regulator as a constant working pressure is assured. 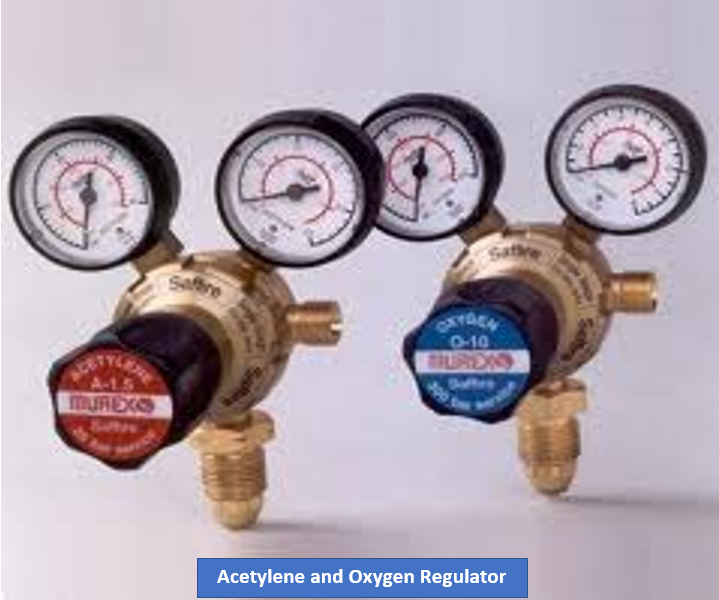 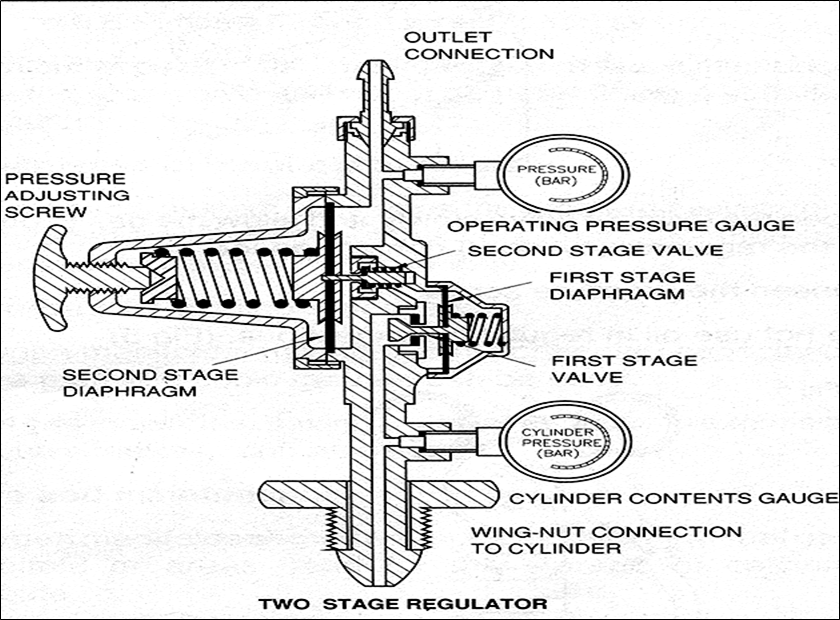 Difference Between Oxygen and Acetylene Regulator

The various precautions to be observed while handling pressure regulators are as shown below.

(a) Regulators must be handled carefully and must not be damaged. If     damaged, it must be returned to store. The welder must not try to repair it himself.

(b) Under no circumstances, oil or grease to be applied to a regulator.

(c) Before fitting, a regulator must be checked for serviceability.

(d) When fitting to the cylinder, the gland nut must be tightened by hand or may be tapped with a mallet. Hammers must not be used on them.

(e) The only repair permissible to the welder is a leaky joint. No jointing material should be used.

The procedure to be followed for testing a regulator is as given below.

(a) Fix the regulator to the appropriate cylinder.

(b) Open the release valve and trap the gas in the regulator upto its delivery valve.

(c) Close the release valve and watch the gauge. If the needle flickers, the regulator is leaky.

(d) To locate a leak, use soapy water. Never use oil or grease. The regulator may be dipped in a basin of soapy water if necessary.

(e) Before fitting a regulator, the adapter sitting in the cylinder should be cleaned of all dirt and dust by releasing a little gas and blowing away all foreign matter.

Repairing Leak in the Regulator

The leaks in a regulator can be repaired by following methods.

(a) Leak at Joint between Regulator and Cylinder. This may be due to the joint being too loose, or dirt between the nipple and the seating. It can be corrected by tightening the gland nut further. If the leak still persists, the regulator is unserviceable and must be returned to stores.

(b) Leak at the Regulator Outlet Valve. This is due to dust between the needle and the seating. To rectify the leak, trap the gas fully in the regulator and open the outlet cock. If the leak persists, it is due to a deteriorated nipple or seating. In such a case, the regulator is unserviceable and it is to be returned to stores.

(c) Leak at the Safety Valve. This is due to either dirt between the valve and its seating or damage seating. No attempt should be made to repair this. here again, the regulator is unserviceable and must be returned to store.

(d) Leak at the Diaphragm. If there is no other leak i.e. at the valve setting, safety valve, outlet valve, and the pressure is still not maintained, it may be assumed that there is a leak at the diaphragm. No tradesman is permitted to repair this unless he is authorized for repair of regulators.