Since the wind is motion of air, it exerts a certain force. The speed of the wind can therefore, be measured in terms of the effect it produces on various objects in its path. It can either be measured by devising suitable instruments or it can be measured by using the effect it produces on natural objects in the surroundings and estimate the strength of the wind. The wind velocity is fully described by two quantities; its speed and direction. The speed may be indicated in any one of the following units:

(a) Knots (or nautical miles per hour)

(b) Metres per second

In early part of 19th century, Admiral Beaufort of the Royal Navy developed the well-known scale of wind velocity that bears his name. The Beaufort system employs a series of numbers from 00 to 12. Each stands for a wind velocity range between certain limits in miles per hour.

It is made of fabric having length 3.6 m with a diameter 0.9 m. The colour is somewhere orange, and somewhere combination of two colours preferably orange  and white or red and white. It should be visible from aircraft in flight or on the movement area. It should be free from the effect of disturbance caused by near by objects. It gives a clear indication of the direction of the surface wind and a general indication of the wind speed. It is just like a cone attached at one end to the top of a pole and other end opened, so that it blows like a flag to show which way the wind is blowing.

The direction of the wind is usually indicated by means of a wind vane. This is essentially a body mounted asymmetrically and free to rotate about a vertical axis. A pointer attached to it shows the direction of the wind. Wind vane, commonly used in IAF observatories, is same as the one India Met Department (IMD) uses. The special feature of the vane is the streamlined tail mounted on a long arm. At the end of the shorter arm is placed a weight to balance the long arm and the whole rod rotates about the vertical axis passing through its centre of gravity. The rotating arm is connected to a short spindle passing through the centre of the supporting base. 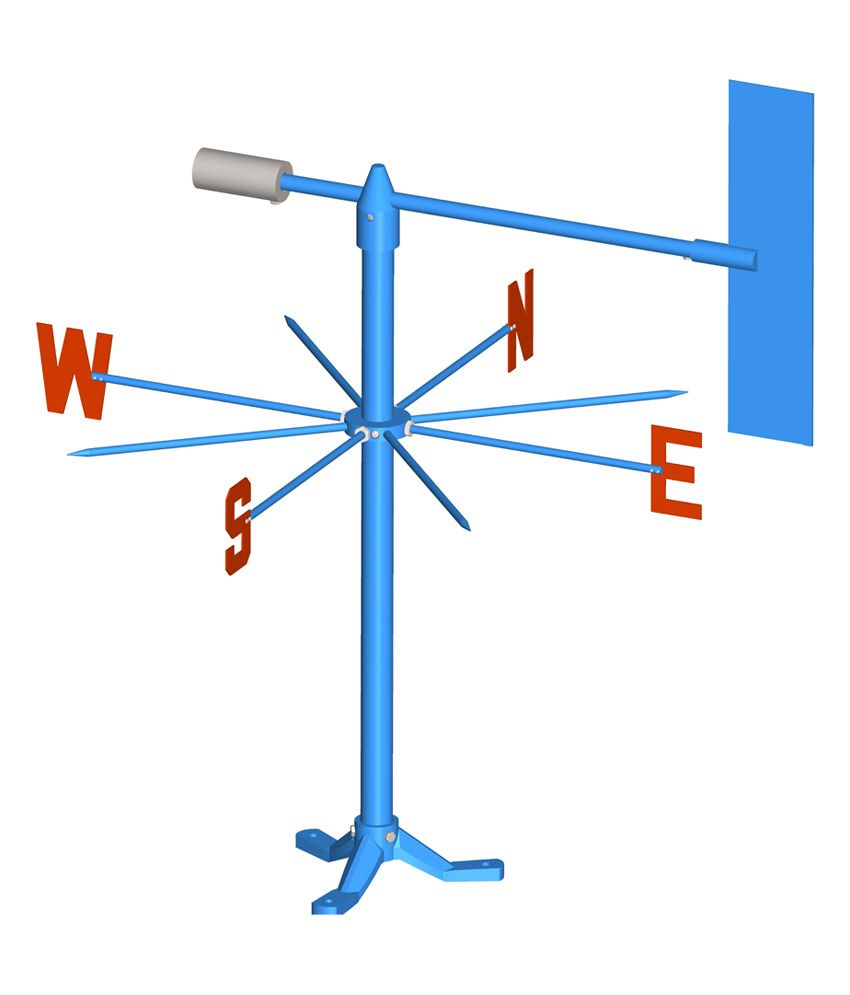 This design ensures a large turning movement about the axis and the vane is exceedingly sensitive even in light wind. Under this swayable system are four direction rods carrying the letter N, E, S and W. These arms are set properly to the original direction (North, East, South and West) of that particular place.

The observer must take the observation from a position vertically below the indicator to avoid the error due to parallax and estimate the wind direction nearest to the point of the compass. If the wind is variable and the vane is not steady, the average position should be noted. When the wind is dead calm the indicator will still point to some direction but the direction should be reported as “00” (calm). If the wind is too feeble to move the vane, the wind direction can be determined with the help of the drift of smoke. The direction also can be determined with the help of dust drift, swaying flag and windsock.

Anemometer is an instrument used to measure the speed of the wind. They are divided into two main types;

(b) Pressure anemometer (no more in use in IAF).

This cup anemometer normally consists of three or four cups mounted symmetrically about a vertical axis so that the diametrical plane of each cup is vertical. The cup assembly is free to rotate about an axis. As the force on the concave side of the cup due to the wind is greater than that on the convex side in a similar position, the cup wheel starts rotating. The Number of revolution of the cups in a given time is usually assumed to be proportional to the amount of wind, which passes them. 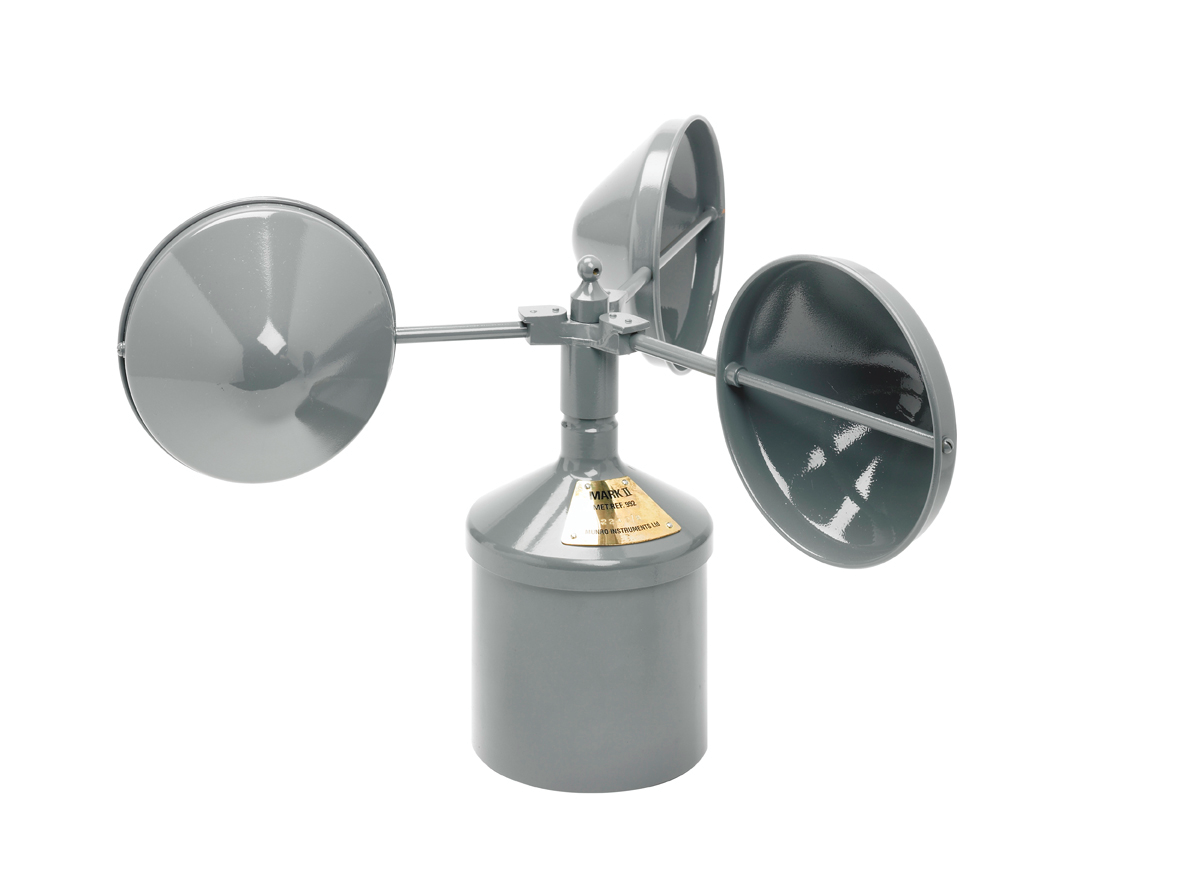 The rotation of the cups can be used to measure the speed of the wind. In one procedure an electrical contact is made after a known number of revolutions of any one cup. This may be used in conjunction with a buzzer and a stop watch or any electrical counting device.

In a DRWE, the instantaneous value of speed and direction of wind at a particular place is indicated on a dial at a remote place. This equipment consists of:

(a) A cup anemometer generator.

(b) A wind vane for direction.

(c) A wind panel for indicating wind speed and direction.

Note: wind vane is connected to a 12 V supply source for the operation of the instrument.

Operation of the Instrument

(a) Put the switch of the supply unit to “ON” position.

The wind vane generally does not need any maintenance during normal life. However the following are to be checked.

(a) Change the transmitter if the indicating needle fluctuates erratically.

(b) Check the proper installation of the connecting cables.

The standard exposure for wind instrument is 10 meter above ground level on a mast or tower away from tall buildings or trees. The distance between the anemometer and any obstruction must be 10 times the height of obstruction above the anemometer. If such a site is not available, the instrument should be installed on a building at least three meters higher than any obstacle, such that eddies caused by the obstacle both vertically and horizontally do not vitiate the readings. If the anemometer and the wind vane are installed on the same platform or mast, they should be 2 meter apart.

Effects of Sun and Solar Radiation on Earth's Atmosphere