Knowledge of the standard designations of metals and the systems of marking metals is necessary so that you can select the proper material for a specific job. The standard designations discussed in this chapter are index numbers that are used to indicate the composition of the various metals. The two major systems used for iron and steel are those of the Society of Automotive Engineers (SAE) and the American and Steel Institute (AISI). The Aluminum Association method is used for aluminum. Other nonferrous metals we designated by the percentage and types of elements in their composition.

FERROUS METAL DESIGNATIONS. You should be with the system of steel classification used by SAE and AISI. These systems are in common use and utilize a four or five-digit number to indicate the composition of the steel. The one major difference between the two systems is that the AISI system uses a letter before the number to show the process used in the making of the steel. The letters used are as follows: B-Acid Bessemer carbon steel: C-Basic open-hearth or basic electric furnace carbon steel; and E-Electric furnace alloy steel.

The first digit indicates the type of steel: 1 stands for carbon steel; 2 is nickel steel; 3 is nickel-chromium steel: 4 is molybdenum steel; 5 is chromium steel: 6 is chromium-vanadium steel; 8 is “National Emergency” steel; and 9 is silicon-manganese steel. (The group identified as “National Emergency” steel, number 8 in the SAE/AISI systems, includes various low alloy nickel-chromium- molybdenum steels developed &ring World War II. Much of the alloy, content of these steels can be derived from scrap alloy, thus conserving the supply of alloy materials. These steels are retained in most steel classifications today.)

The second digit in the SAE/AISI number indicates the series within the group indicated by the first digit. The term series ill this connection usually refers to the percentage of the chief alloying element. Sometimes the second digit gives the actual percentage of the chief alloying element. In other cases, however, the second digit may be used to indicate the relative position of the series in the group, without reference to the actual percentage. The last two or three digits indicate the average carbon content of the steel. In order to make the various steels fit into this classification it is sometimes necessary to vary the system slightly. These variations are easily understood if you understand the system. (See the following examples.)

(1) SAE 1035. The first digit is 1, so this is a carbon steel. The second digit, 0, indicates that there is no other important alloying element, therefore, this is a plain carbon steel. The next two digits, 35, indicate that the average percentage of carbon in steels of this series is 0.35 per cent. The actual carbon percentage in this series ranges from 0.32 to 0.38.

(2) SAE 1146. This is a carbon steel (first digit) with an average manganese content of 1.00 per cent (second digit) and an average carbon content of 0.46 per cent. The 1100 series of steels are known as free cutting steels.

(5) SAE 52100. This number indicates a chromium steel (first digit) of a higher alloy series (second digit) than the SAE 51100 steel previously described. Yote that in this case the second digit 2 merely identifies the series but does not indicate the percentage of chromium. A 52100 steel would actually have from 1.30 to I.60 per cent chromium with an average carbon content of I.00 per cent (last three digits).

There used to be a 7000 series SAE steel, but under a new system it is no longer used. The current commonly used tool steels have been classified by the American Iron and Steel Institute into seven major groups and each commonly accepted group or subgroup has been assigned an alphabetical letter. Methods of quenching. applications. special characteristics and steels for particular industries were considered in the following type classification of tool steels.

NONFERROUS METAL DESIGNATIONS. Nonferrous metals are generally grouped according to the alloying elements. Examples of these groups are brass, bronze, copper-nickel, and nickel-copper. Specific designations of an alloy are described by the amounts and chemical symbols of the alloying elements. For example, a copper-nickel alloy might be described as capper-nickel, 70 Cu-30 Ni. The 70 Cu represents the percentage of copper and the 50 Si represents the percentage of nickel.

Common alloying elements and their chemical symbols are as follows.

In addition to the type of designations previously described, a trade name (such as Mon.4 or Inconel) is sometimes used to designate certain alloys.

The Aluminum Association uses a four-digit designation system similar to the SAE/AISI system described for steels. The numerals assigned with their meaning for the first digits of this system are as follows.

Note that while some temper designations apply only to wrought products and others only to cast products, most apply to both. A second digit may appear to the right of the mechanical treatment, indicating the degree of hardening: 2 is ¼ hard, 4 is 112 hard, 6 is ¾ hard, and 8 is full hard. For example, the alloy 5456-H32 is an aluminum/magnesium alloy, strain hardened. then stabilized, and is ¼ hard.

STANDARD MARKING OF METALS. The metal markings described in this section include the color symbols used for nonferrous metals.

The continuous identification marking is actually printed on the metals with a heavy ink that is almost like a paint.

The manufacturer is required to make these markings on materials before delivery. Figure below shows the normal spacing and layout. 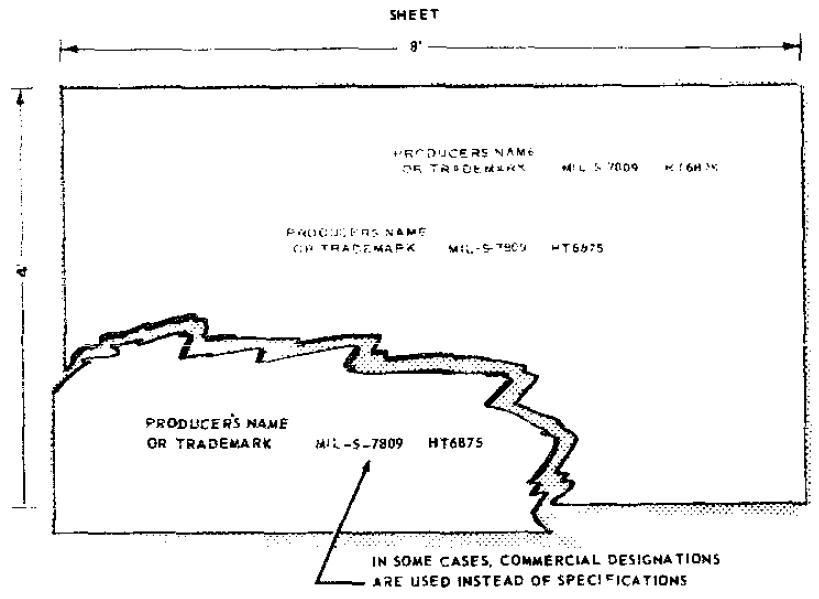 For some years, a system of color symbols with a related color code has been used for the identification of nonferrous metals. Although the color marking system is being replaced by continuous identification marking, you should still be familiar with the nonferrous color system. Some of the nonferrous stock that you obtain is likely to be marked with color symbols, since the material marked and coded under the color system may not be entirely used up for several years.

COLOR SYMBOLS. The term color symbol refers to the color marking actually painted on the nonferrous metal. A symbol is n design composed of one, two or three colors and painted on a conspicuous area of the piece. When the symbol consists of more than om color the colored areas are adjacent to each other.

There are two types of color symbols. Spot symbols that arc applied to each end of solid stock that is at least ¾ inch in diameter (for round stock) or at least ¾ in the smallest dimension (for other shapes) are also used to mark ingots or other bulky pieces. Peripheral symbols are primarily used for tubular stock and for solid stock that is too small for the spot symbols. Peripheral symbols are painted in bands around each piece, approximately 6 inches from each end. Pieces that are too small for either spot or peripheral marking may be bundled and tagged. In such cases, the spot symbols should be clearly marked on the tag. 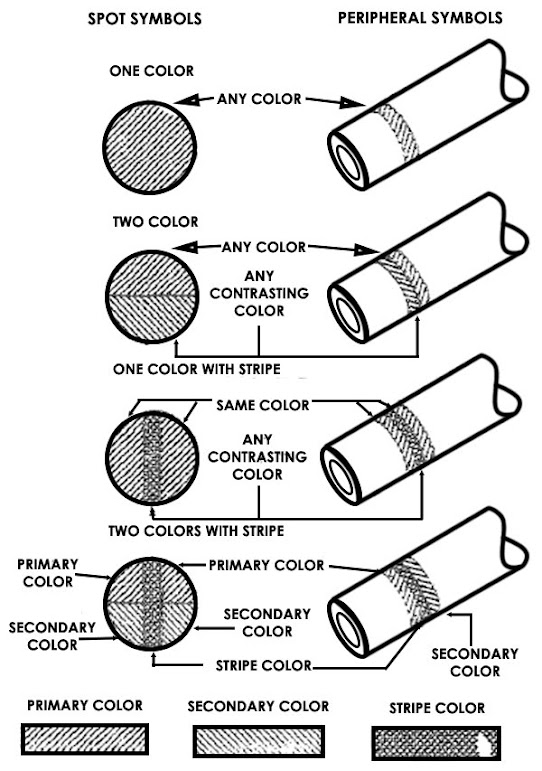 The purpose of applying the color symbol at each end of the piece is to ensure the pressure of one symbol even after part of the piece has been cut off used. Do not forget this purpose. If for some reason identifying symbol is cut off from both the ends, be sure to renew the color symbol while you still know what the material is. Otherwise someone will be left with the problem of identifying an unmarked piece of metal.

Here are a few examples. A two-color symbol composed of red and green would be called a green-red symbol, and its color code would be 6-10. If a blue stripe is added, the color code would be 6-10-2. Suppose the color symbol is yellow divided into two equal areas by a green stripe, the yellow must be considered as being both a primary color and a secondary color and is therefore written twice. You would then call this a yellow-yellow-green symbol with a color code of 13-13-6.