For multi-start worm, lead = Linear pitch x No. of starts 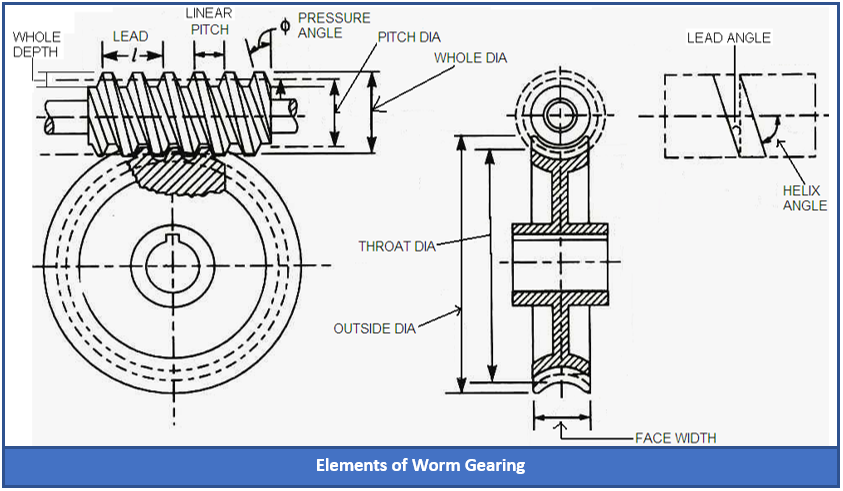 (b) Linear Pitch (LP). It is the distance measured axially (i.e. parallel to the axis of worm) from a point on one thread, to the corresponding point on the adjacent thread on the worm.

(c) Helix Angle. It is the angle between the tangent to the thread helix on the pitch cylinder and the axis of the worm.

(d) Lead Angle. It is the angle between the tangent to the thread helix on the pitch cylinder and the plane normal to the axis of the worm.

(e) Whole Depth. It is the complete one side depth of thread. It is from the crest to the root measured normal to the axis.

(f) Pressure Angle. It is measured in a plane containing the axis of the worm and is equal to one half the thread profile angle. The following table shows the recommended values of lead angle and pressure angle.

(g) Velocity Ratio. It is the ratio of the speed of worm (Nw) in RPM to the speed of the worm gear (Ng) in RPM

(i) Throat Radius. This is the radius of the face curve and is made to suit the curvature of worm.

(k) Face Angle. This is the angle to which the face of the wheel is turned. It is usually 60 degrees to 80 degrees but 75 deg is mostly adopted.

(l) Out Side Diameter at the Sharp Corners. It is the over all diameter of the worm wheel.

(m) Normal Circular Pitch (NCP). It is the distance between two corresponding points of the adjacent teeth measured along the pitch circle.

Rules and Formulae for Worm Gearing

(b) Circular Pitch of worm wheel (CPg). It can be calculated by dividing circumference of pitch circle by number of teeth of the worm wheel.

CPg = Pitch Circumference/ No. of Teeth of Worm Wheel