Titanium is a chemical element with the symbol Ti and atomic number 22. Sometimes called the “space age metal”, it has a low density and is a strong, lustrous, corrosion-resistant (including sea water and chlorine) with a silver color.

A metallic element, Titanium is recognized for its high strength-to-weight ratio It is a strong metal with low density that is quite ductile (especially in an oxygen-free environment) lustrous, and metallic-white in color. The relatively high melting point (over 1,649°C or 3,000°F) makes it useful as a refractory metal.

Commercial (99.2% pure) grades of Titanium have ultimate tensile strength of about 63,000 psi (434 MPa), equal to that of common, low-grade steel alloys, but are 45% lighter. Titanium is 60% more dense than Aluminium, but more than twice as strong as the most commonly used Aluminium alloy. Certain Titanium alloys  achieve tensile strengths of over 200,000 psi (1,400 MPa).

It is fairly hard, although not as hard as some grades of heat-treated steel, non-magnetic and a poor conductor of heat and electricity. Machining requires precautions, as the material will soften if sharp tools and proper cooling methods are not used.

Titanium burns in air when heated to 1,200°C (2,190°F) and in pure oxygen when heated to 610 °C (1,130°F) or higher, forming titanium dioxide. As a result, the metal cannot be melted in open air as it burns before the melting point is reached, so melting is only possible in an inert atmosphere or in a vacuum.

Due to their high tensile strength to density ratio, high corrosion résistance, fatigue resistance, high crack resistance, and ability to withstand moderately high temperatures without creeping, Titanium alloys are used in aircraft, naval ships, spacecraft, and missiles. For these applications titanium alloyed with Aluminium, Vanadium, and other elements is used for a variety of component including critical structural parts, fire walls, landing gear, exhaust ducts (helicopters), and hydraulic systems. In fact, about two thirds of all Titanium metal produced is used in aircraft engines and frames.

Titanium metal is used in automotive applications, particularly in automobile or motorcycle racing, where weight reduction is critical while maintaining high strength and rigidity.

Strength of pure Titanium can be considerably increased by the addition of alloying elements such as Aluminium, Manganese, Vanadium and Molybdenum. Titanium alloys respond to heat-treatment by precipitation hardening. They possess very high mechanical strength, high fatigue strength and good corrosion resistance. They have highest specific strength of all structural materials.

Some typical compositions of commercially used titanium alloys, their properties and applications are given in the following table.

How Temperature Brings Change in The Crystal Structure of Metals

Like Titanium, Zirconium had to wait for a commercial process to free it from the laboratory. It is having extra ordinary corrosion resistance quality. 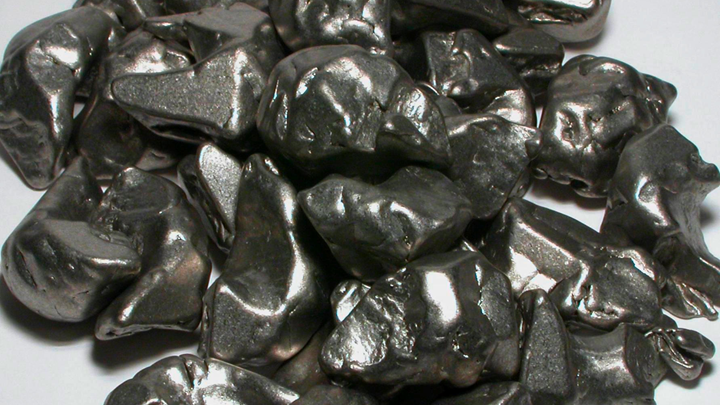 Like Titanium, Zirconium undergoes a physical transformation at approximately 1589F. The room temperature phase, called alpha, has a closed-packed hexagonal crystal structure. Above 1589F, the crystal structure is body-centred cubic, called Beta Zirconium. The hexagonal close-packed structure in metals is generally considered to confer poor ductility because of the presence of only one plane of easy slip, but Zirconium, like Titanium, is exception to this general rule and can be worked with ease at room temperature.

The hardness of Zirconium varies from about 175 to 275 Brinnel, more than that of Aluminium alloys but less than steel.

Cold working of Zirconium increases its strength and hardness, and cold-rolling produces a pronounced loss in ductility.