An engineering drawing, besides illustrating the shape of an object, must also show the size and any other relevant details essential for the construction of the object. Indicating on a drawing, the sizes of the object and other details essential for its construction and function using lines, numerals, symbols, notes, etc., is called dimensioning. The dimensions are given to indicate the sizes of various features of the object and their locations. Indicated dimensions of an object should not be mistaken as those which are required to make the drawing. The dimensions indicated on engineering drawings are those which are essential for production, inspection and functioning of the object.

The two systems of placing the dimensions on a drawing are Aligned System and Unidirectional System. Both the systems are recommended in SP: 46-1988 by Bureau of Indian Standards and have been taught in Chapter-6 of Basic Engineering Drawing.

Dimensioning in engineering drawing is executed as follows:

Leaders (or pointer lines) are continuous thin lines drawn from notes and figures to show where they apply. Leaders are terminated either by arrow heads or dots. While arrow heads connected to a leader should always terminate at a line, the dots connected to a leader should be within the outline of the object drawn freehand. Leaders may also terminate in a short horizontal bar at the bottom level of the lettering of the first or last line of the note. (Refer Fig “Notation of Dimensioning” above)

Leaders which touch lines should not normally be inclined at an angle less than 30 (Refer Fig Leaders (Pointer Lines)), and they should not be parallel to adjacent dimension or projection line, where confusion might arise. The use of common leaders should be avoided even if it means repeating the dimensions or notes. (Refer Fig Avoid Long Leaders)

Each end of a dimension line should be defined by an arrowhead, whose two branches should be at an angle sufficiently open to mark clearly the extremities of the dimension lines. Alternatively, the length of the arrow head may be taken as about three times the width. The space in the arrowhead is filled in. The size of arrowheads should be proportionate to the thickness of the lines of the drawing and size of drawing. It is recommended that the barbs of the arrowhead form an included angle of 15 or more.

Arrowheads should be drawn within the limits of the dimensioned feature. When enough space is not available, they should be placed outside.

Addition of Letters and Symbols

The following letters or symbols are commonly used in dimensioning: 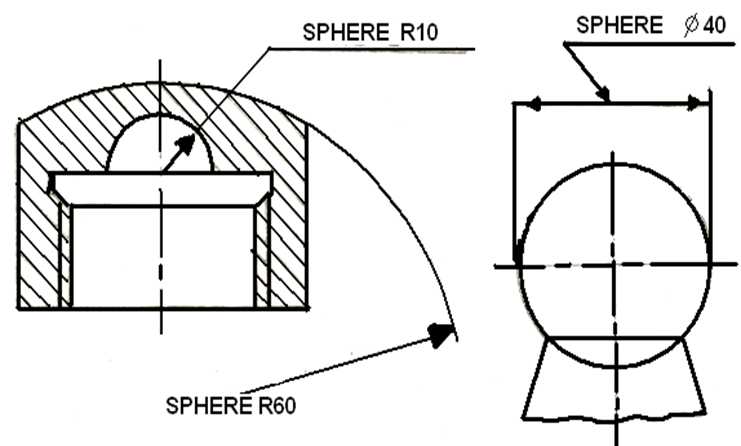 Some typical examples are shown below to give an idea of the methods of indicating angular dimensions and tolerances.

(a) Chain Dimensioning. Chain dimensioning should only be used where the possible accumulation of tolerances does not endanger the functional requirement of the part.

(b) Parallel Dimensioning. Where a number of dimensions have a common datum line/surface, the dimensions are indicated by individual parallel dimension lines as shown below.

(d) Progressive Dimensioning. In parallel dimensioning, since the Dimension lines of each of the dimensions are drawn separately parallel to each other, a large space is required for dimensioning. Where there is space constraint or likelihood of confusion, progressive dimensioning as shown in Figs below may be used for simplicity. In this method, the datum line is indicated by a dot and a zero sign. The dimensions and the zero are placed in line with the projection lines.

Complete List of Instruments Used for Diagrams in Engineering Drawing

(g) Assembled Parts Dimensioning. When several parts are drawn in assembly, the groups of dimensions related to each part shall be kept separate as much as possible.

(h) Dimensions, the true length of which is not possible to be shown in any view, may be indicated as shown in Fig Dimensioning of Lengths. This method is to be used only when it is not practicable to provide sufficient view and sections to show dimensions in the true length.