Engineering drawings are prepared on standard size drawing sheets. The correct shape and size of the object can be visualized from the understanding of not only its views but also from the various types of lines used, dimensions, notes, scale etc. For uniformity, the drawings must be drawn as per certain standard practice. This chapter deals with the drawing practices as recommended by Bureau of Indian Standards (BIS) SP: 46:2003. These are adapted from what is followed by International Standards Organisation (ISO).

The standard drawing sheet sizes are arrived at on the basic Principal of x: y = 1 : √2 and xy = 1 where x and y are the sides of the sheet. For example A0, having a surface area of 1 Sq.m; x = 841 mm and y = 1189 mm. The successive sizes are obtained by either by halving along the length or.doubling the width, the area being in the ratio 1 : 2. Designation of sizes is given in Fig.l and their sizes are given in Table 1. For class work use of A2 size drawing sheet is preferred.

The title block should lie within the drawing space at the bottom right hand comer of the sheet. The title block can have a maximum length of 170 mm providing the following information.

1. Title of the drawing.
2. Drawing number.
3. Scale.
4. Symbol denoting the method of projection.
5. Name of the firm, and
6. Initials of staff who have designed, checked and approved.

The title block used on shop floor and one suggested for students class work are shown in Fig.2.

Below is shown the method in which drawing sheets may be unfolded and refolded, without the necessity of removal from the file.

Just as in English textbook the correct words are used for making correct sentences; in Engineering Graphics, the details of various objects are drawn by different types of lines. Each line has a definite meaning and sense to convey.

IS 10714 (Pint 20): 2001 (General principles of presentation on technical drawings) and SP 46:2003 specify the following types of lines and their applications:

BIS recommends two line widths on a drawing. Ratio between the thin and thick lines on a drawing shall not be less than 1 : 2.

Lettering is defined as writing of titles, sub-titles, dimensions, etc., on a drawing.

To undertake production work of an engineering components as per the drawing, the size and other details are indicated on the drawing. This is done in the form of notes and dimensions.

Main Features of Lettering are legibility, uniformity and rapidity of execution. Use of drawing instruments for lettering consumes more time. Lettering should be done freehand with speed.

Practice accompanied by continuous efforts would improve the lettering skill and style. Poor lettering mars the appearance of an otherwise good drawing.

Vertical letters are preferred for easy and fast execution, instead of sloped letters.

Note: Lettering in drawing should be in CAPITALS (i.e., Upper-case letters). Lower-case (small) letters are used for abbreviations like mm, cm, etc.

• Size of Letters is measured by the height h of the CAPITAL letters as well as numerals.
• Standard heights for CAPITAL letters and numerals recommended by BIS are given below :
1.8, 2.5, 3.5, 5, 6, 10, 14 and 20 mm
Note: Size of the letters may be selected based upon the size of drawing.

Dimensioning of Type B Letters (Figs 5 and 6)

Practice of lettering capital and lower case letters and numerals of type B are shown in Figs. 7 and 8.

The following are some of the guide lines for lettering (Fig 9 & 10)
1. Drawing numbers, title block and letters denoting cutting planes, sections are written in 10 mrn size.
2. Drawing title is written in 7 mm size.
3. Hatching, sub-titles, materials, dimensions, notes, etc., are written in 3.5 mm size.
4. Space between lines = ~ h.
5. Space between words may be equal to the width of alphabet M or 3/5 h.

6. Space between letters should be approximately equal to 115 h. Poor spacing will affect the visual effect.
7. The spacing between two characters may be reduced by half if this gives a better visual effect, as for example LA, TV; over lapped in case of say LT, TA etc, and the space is increased for letters with adjoining stems.

Drawing of a component, in addition to providing complete shape description, must also furnish information regarding the size description. These are provided through the distances between the surfaces, location of holes, nature of surface finish, type of material, etc. The expression of these features on a drawing, using lines, symbols, figures and notes is called dimensioning.

Some of the basic principles of dimensioning are given below.
I. All dimensional information necessary to describe a component clearly and completely shall be written directly on a drawing.
2. Each feature shall be dimensioned once only on a drawing, i.e., dimension marked in one view need not be repeated in another view.
3. Dimension should be placed on the view where the shape is best seen (Fig. 14)
4. As far as possible, dimensions should be expressed in one unit only preferably in millimeters, without showing the unit symbol (mm).
5. As far as possible dimensions should be placed outside the view (Fig. 15).
6. Dimensions should be taken from visible outlines rather than from hidden lines (Fig. 16).

7. No gap should be left between the feature and the start of the extension line (Fig. I7).
8. Crossing of centre lines should be done by a long dash and not a short dash (Fig. I8).

When a radius is dimensioned only one arrow head, with its point on the arc end of the dimension line should be used (Fig. 24). The arrow head termination may be either on the inside or outside of the feature outline, depending on the size of the feature.

The dimensions are indicated on the drawings according to one of the following two methods.

Dimensions should be placed parallel to and above their dimension lines and preferably at the middle, and clear of the line. (Fig. 25).

Dimensions should be indicated so that they can be read from the bottom of the drawing only.

Non-horizontal dimension lines are interrupted, preferably in the middle for insertion of the dimension (Fig. 27a).

Angular dimensions may be oriented as in Fig. 27b.

Note: Horizontal dimensional lines are not broken to place the dimension in both cases.

The following indications are used with dimensions to show applicable shape identification and to improve drawing interpretation. The diameter and square symbols may be omitted where the shape is clearly indicated. The applicable indication (symbol) shall precede the value for dimension (Fig. 28 to 32). 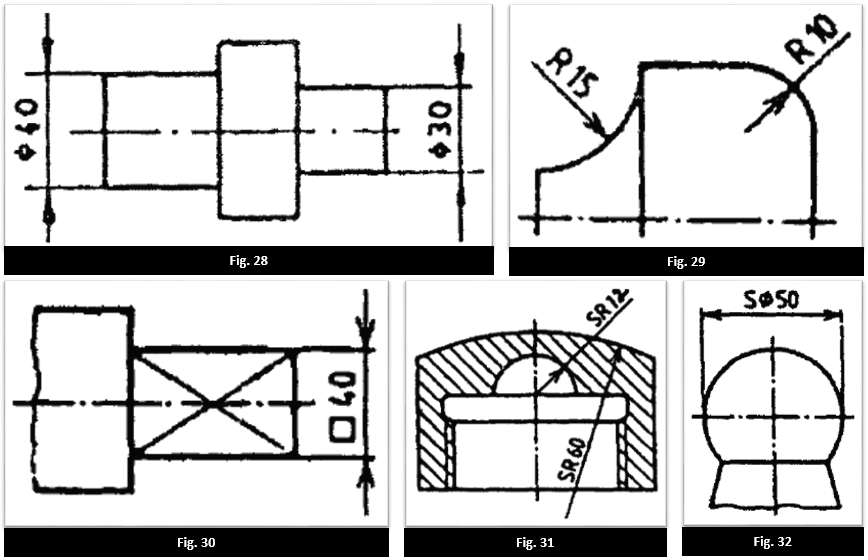 The arrangement of dimensions on a drawing must indicate clearly the purpose of the design of the object. They are arranged in three ways.
1. Chain dimensioning
2. Parallel dimensioning
3. Combined dimensioning.

1. Chain dimensioning: Chain of single dimensioning should be used only where the possible accumulation of tolerances does not endanger the fundamental requirement of the component (Fig. 33)

Violation of some of the principles of drawing are indicated in Fig. 36a. The corrected version of the same as per BIS SP 46-2003 is given is Fig. 36b. The violations from 1 to 16 indicated in the figure are explained below. 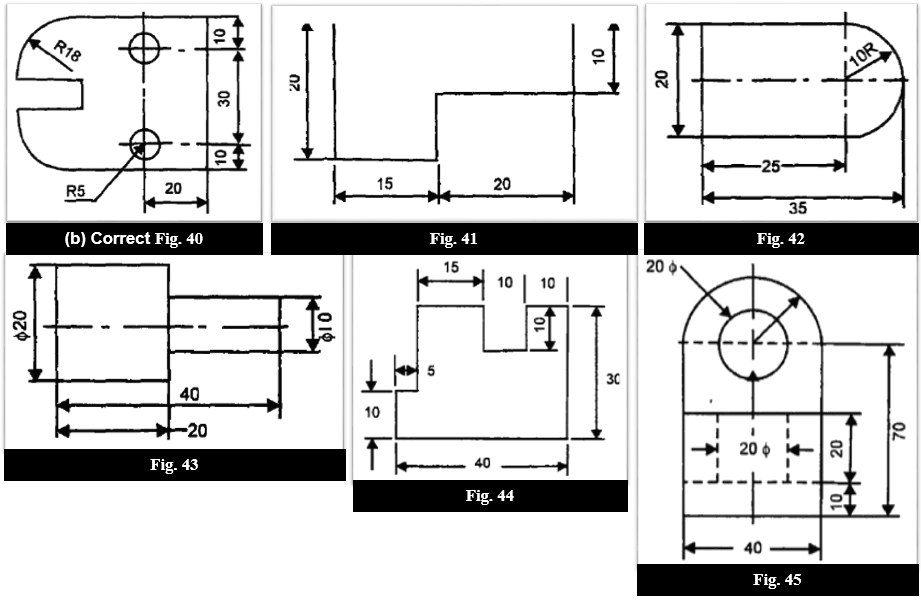 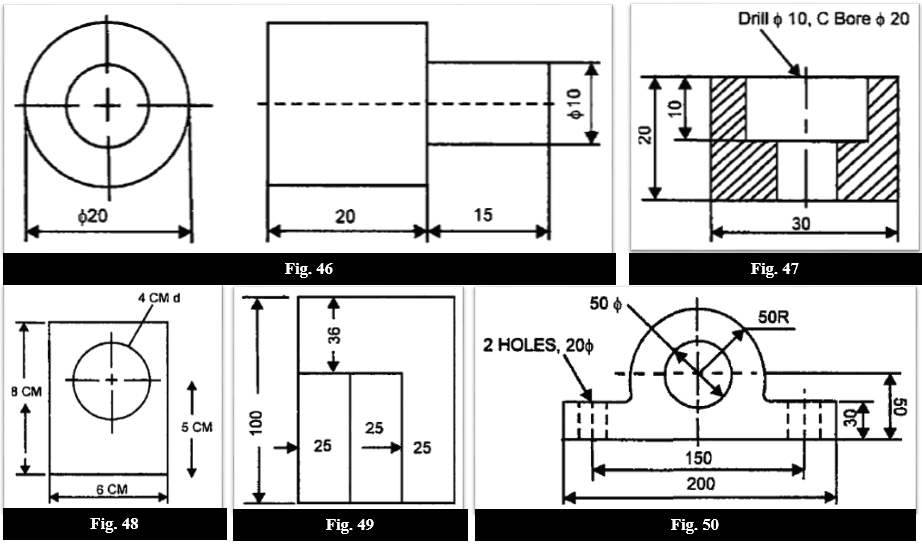 1 thought on “Lettering and Dimensioning Practices”