Engineers are confronted with the task of communicating the design, development and structures of machines to manufacturers and builders. The shape and size of various parts of a machine and its structure must be recorded on plane sheets in a systematic way for communication. The pictorial view of the object does not carry all the details, especially the inner details and correct shape of complicated parts. Different methods, therefore, are implied for describing the exact shape based on the ‘projectors’ drawn by engineers.

If straight lines are drawn from various points on the contour of an object to meet a plane, the object is said to be projected on that plane. The figure formed by joining, in correct sequence, the points at which these lines meet the plane, is called the projection of the object. The lines from the object to the plane are called projectors.

Projection on a Single Plane

The projections are classified according to the method of taking the projection on the plane. A classification of projection is shown below: 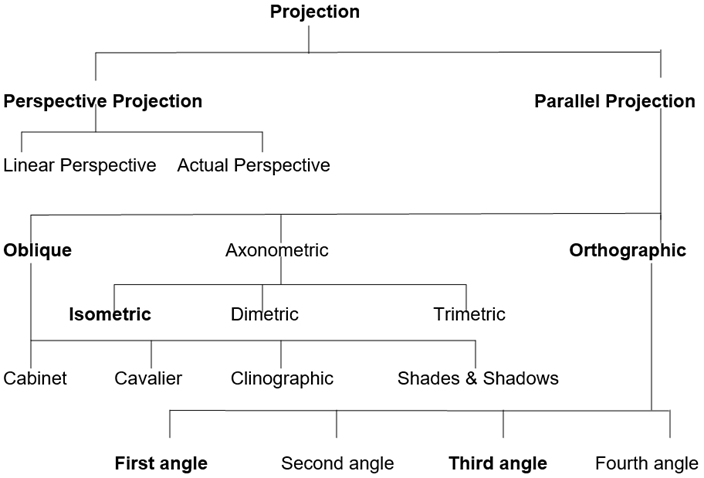 Factors on Which Type of Projection Depends

In engineering drawing following four methods of projection are commonly used, these are:

In the above methods (the first three methods represent the object by a pictorial view as an observer sees it. These projections, which come under the category of ‘Pictorial Drawing’ have already been discussed in detail here. In these methods of projection, a three-dimensional object is represented on a projection plane by one view only. While in the orthographic projection an object is represented by two or three views on the mutual perpendicular projection planes. Each projection view represents two dimensions of an object. For the complete description of the three-dimensional object, at least two or three views are required. Orthographic projection comes under the category of ‘Non-Pictorial Drawing’.

The word orthographic means straight description. The straight description here stands for the parallel projectors from the object to infinity. If a perpendicular picture plane is inserted between the projectors, a picture is formed having the same shape and size as that of the object. If an observer at position ‘A’ moves to infinity, the projectors to his eyes becomes parallel to the object and he observes the same shape and size as that of the object. (Refer Fig 2). The view so formed is known as the orthographic projection. Similarly, the parallel projectors shall form the pictures on the respective picture planes from the positions B and C. Usually two views are sufficient for simple objects, but the help of three or more views is necessary for complicated objects. These picture planes are mutually perpendicular to each other and are known as ‘Principal Planes’ of projectors, named Horizontal Plane (HP), Vertical Plane (VP) and Profile Plane (PP).

The two methods of projections are:

Figure 3 shows four quadrants formed by the intersection of horizontal and vertical planes. The intersecting line of the planes is called the co-ordinate axis. The revolving direction of the horizontal plane shows that quadrants I and III are “open” but II and IV quadrants become “closed” when the horizontal plane coincides with the vertical plane. It is obvious that the closed quadrant has no use for the purpose of projectors as the views taken on these will overlap.

This method of projection is popular in Europe, especially in Britain. Bureau of Indian Standard has also recommended it now. Figure 4 shows an object placed in the first quadrant. Parallel projectors in the direction ‘A’, from the object, forms a picture on the vertical plane (VP) which is known as Front View or Front Elevation. Similarly, parallel projectors from the direction of ‘B’ forms the picture on the horizontal plane (HP), known as Top View or Plan. A mutually perpendicular plane to both HP and VP, known as profile plane (PP) also receives projectors from the object from the direction C. The view on the profile plane is known as Side View or Side Elevation. The three planes containing the views are then opened on a plane as shown in Fig. 5. The symbol of first angle is shown in Fig 6.