Before we discuss in details the working principle, construction, repair and maintenance of an engine, we should know, what is an engine? Any machine which converts heat energy into mechanical work is called an engine. There are various types of engine used in Automobile as tabulated below. 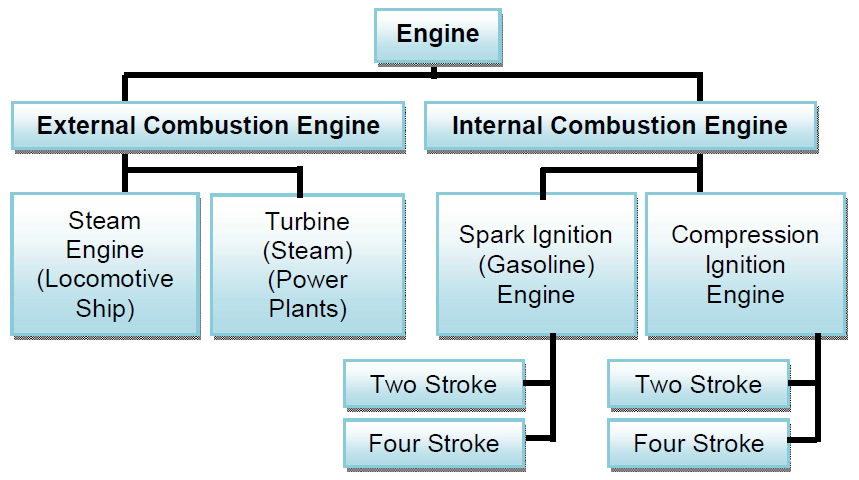 Internal/External combustion engines: Those engines in which combustion takes place outside the cylinder and steam is conveyed to the individual cylinder. Whereas in internal combustion engine the fuel is burnt inside the combustion chamber of the cylinder in which chemical energy stored in the fuel is converted into heat energy and further heat energy is converted into mechanical energy by expansion of gases against the piston attached to the crankshaft.

SI/CI Engine: There are two types of IC Engines classified according to their mode of igniting the fuel as:

Spark Ignition: The Petrol engine draws a mixture of petrol and air in the ratio of 1:12 to 16.This mixture is supplies to the engine by a carburettor and compressed to about 1/6th of its volume. The compression pressure at the end of compression stroke is generally 90to 100 lbs/sq in, and it generates temperature of 60ºC to 80ºC.This charge is than ignited by a electrical spark.

Compression Ignition: It only draws air in the cylinder and it is compressed to 1.20th of its volume and creates a compression pressure of 400 to 500 lbs/sq in. and temperature of the air is raised to 600ºC.This temperature is sufficient enough to ignite the diesel fuel, which is injected into the cylinder in affine spray form by an injector.

How to Buy Best Domain Name & Web Hosting for Website

(a) Bore. The inside diameter of a cylinder, expressed in inches or mm.

(b) Stroke. The distance covered by the piston while piston moves from TDC (Top Dead Centre) to BDC (Bottom Dead Centre) and vice versa, is usually measured in inches or mm.

(c) Top Dead Centre (TDC). The extreme position of the piston inside the cylinder when it is at the top of its travel and is about to begin its downward journey.

(d) Bottom Dead Centre (BDC). The extreme position of the piston inside the cylinder when it is on its downward journey and is about to begin its upward journey.

(fi) Combustion. It is the process of chemical combination of fuel with oxygen evolving heat.

(g) Combustion Chamber. The space enclosed by the cylinder head and piston when the piston is at T.D.C.

(h) Clearance Volume. This is the volume of the combustion chamber below cylinder head and top of the piston crown when the piston is at TDC.

(i) Swept Volume. The volume of the cylinder swept by the piston while moving from one dead center to the other i.e. TDC to BDC.

(j) Overall Volume. Volume above the piston head when the piston is at B. D.C. i.e. swept volume plus clearance volume.

(l) Horse Power. It is the bigger unit of power by which we can measure the rate at which an engine works.

Note: The power required to lift 75 Kg of weight by one meter in one second is known as Horsepower. One horsepower is equal to 75KgM per second or 4500 Kg M per minute or 33000 Ft lbs / minute.

(m) Indicated Horse Power (IHP). The power actually developed inside the engine cylinder by the combustion of fuel is called IHP.

(n) Brake Horse Power. The power, which the engine actually delivers to do the actual work is called BHP. It is the power output of an engine. It is usually 70 to 85 % of its IHP.

(o) Frictional Horse Power. Output power (BHP) of an engine is always less than input power (IHP), because some power is lost in overcoming the friction between moving parts. The power lost in friction in engine mechanism is called frictional horsepower.

(q) Thermal efficiency. Thermal Efficiency is the relation between the power produced and the energy in the fuel burned to produce this power. It may be as low as 20 percent. Generally it is higher than 25 percent.

(r) Crank Web. The portions of a crankshaft which unites the crankpin to the crankshaft journals.

(s) Crank Pin. The short part of the crankshaft to which the big end is attached.

(t) Crankshaft. It is the principal rotating member of an engine. It converts the reciprocating motion of the pistons into rotary motion.

(u) Eccentric. A modification of the crank, comprising a means whereby the rotary motion of a shaft can be converted into up and down or reciprocating motion. Usually, an eccentric consists of a circular piece of metal mounted out of its centre upon a shaft in an automobile engine. The eccentric mechanism has been employed for the construction of lubricator feed systems and for driving the mechanical fuel pumps.

(v) Gudgeon Pin. Piston pin or wrist pin or gudgeon pin connects the piston and the small end of the connecting rod. Piston pin is generally hollow and made from case hardened steel, heat treated to produce a hard and wear resisting surface.

(w) Piston. This is a light cylindrical member in an engine, which provides a means of conveying the expansion of gases to the crankshaft, via the connecting rod, without loss of gas from above or oil from below. Its motion is reciprocating.

(y) Piston Rings. Piston rings are narrow split rings made of cast iron fitted into the grooves of the piston to maintain good seal between piston and cylinder walls.

(z) Piston Slap. A knocking noise produced due to excessive clearance between piston and cylinder walls. Sometimes noticed on engines fitted with aluminiurn alloy pistons, when engine is cold but disappearing when engine warms up.

(aa) Valve. Valve is a device to open and close a passage. In motor vehicles two valves are used for each cylinder, inlet or intake valve and exhaust valve.

(ab) Port. A passage in the cylinder block adjacent to the valve and communicating with either the induction manifold or exhaust manifold.

(ac) Push Rod. A light rod interposed between tappet and valve rocker in an overhead valve engine to operate inlet and exhaust valve.

(ad) Pre-ignition. When the compressed mixture gets ignited before the actual spark is delivered, it is known as pre-ignition. It may occur due to hot part of cylinder head or red-hot carbon deposits.

(ae) Rocker. A short rocking lever used in overhead valve mechanism to transmit the motion from the push-rod to the valve.

(af) Small End. The smaller or upper bearing of connecting rod holding the gudgeon pin of the piston, where bush bearing is fitted.

(ag) Timing Gear. The arrangement of gears, or chain and sprockets which is used to connect the crankshaft to the camshaft to determine the opening and closing of valves.

(ah) Sump. The lower and detachable portion of crankcase used as a container for the engine lubricating oil.

(ai) Crank Case. The lower portion of the cylinder block which forms the support for the cylinder and provision is made to house the crankshaft main bearing.

(aj) Tappet. A short circular member, carried in a sleeve or bush, conveys the reciprocating motion, due to cam lift and fall, to the valve.

(ak) Tappet Clearance. It is a small gap maintained between the tip of the valves and tip of the rocker arms to give the best performance from the engine and to retain the maximum useful life of valves.

(am) Flywheel. A heavy steel or cast iron wheel mounted on the main shaft of the engine to even up the intermittent power impulses given to the crankshaft by the pistons.