What is Auxiliary Gearbox?

Auxiliary Gear Box is a mechanism that makes possible an increase in the tractive force of a motor operated vehicle by increasing the gear movement ratio of the transmission. For example, an auxiliary gearbox is used in the transmission mechanism of heave-duty motor vehicles such as tractors to increase mobility under heavy road conditions.

On some vehicles an auxiliary gearbox is fitted immediately behind the main gearbox. Its purpose is to lower the whole range of gear ratios under more difficult road and load conditions. It is operated by a separate gear lever having three positions, high, low and neutral. Normally the gear is left in the high speed position but can be moved into the low speed position if a reduction in speed is considered necessary. It is important that the gear change must be made, only when the vehicle is stationary. Similarly, when changing from low to high gear the vehicle must be stationary.

(a) The Main or Driving Shafts. Driven from the main gearbox, its rear end supported in a spigot formed in the tail shaft. The main shaft is splined and carries a single gear wheel, which, in addition to straight cut teeth, has dogs machined on its rear face.

(b) A Subsidiary Shaft. With one large gear wheel, and another gear wheel, which is in constant mesh with the tail shaft gear wheel. Both the gear wheels are solid with the shaft.

(c) A Tail Shaft. This is connected by a universal joint to the propeller shaft. It carries one gear wheel, which is keyed to it. In addition to straight cut teeth, it has dogs at its front face.

A selector mechanism similar to that of a main gearbox can be manipulated to move the sliding gear on the splined main shaft to obtain either high or low gear. It is operated in the following manner. 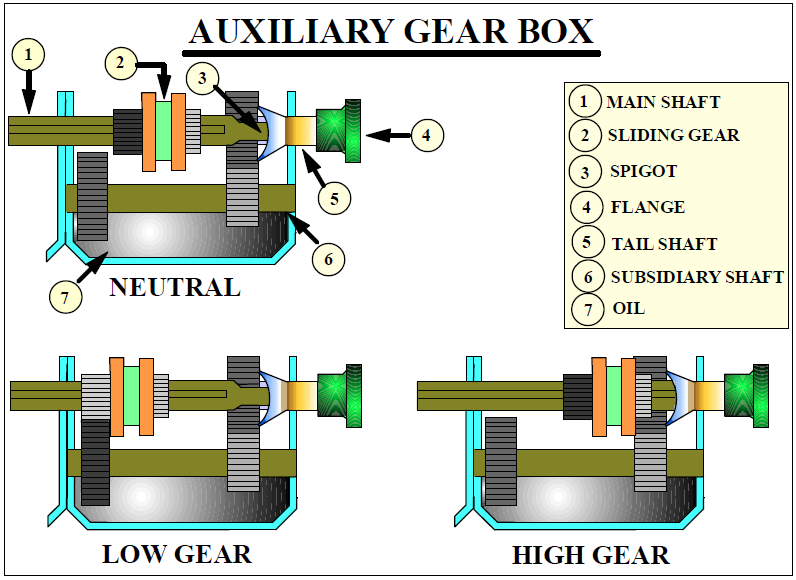 (a) High Gear. The sliding gear wheel is moved along the splinces of the main shaft, so that the gear wheel dogs engage those of the gear wheel on the tail shaft. The drive is, therefore, straight through with no reduced gear ratio.

(c) Neutral. Neutral position is obtained when the gear lever is in a central position, so the sliding gear wheel is midway between gear wheel on subsidiary shaft and that of the tail shaft.